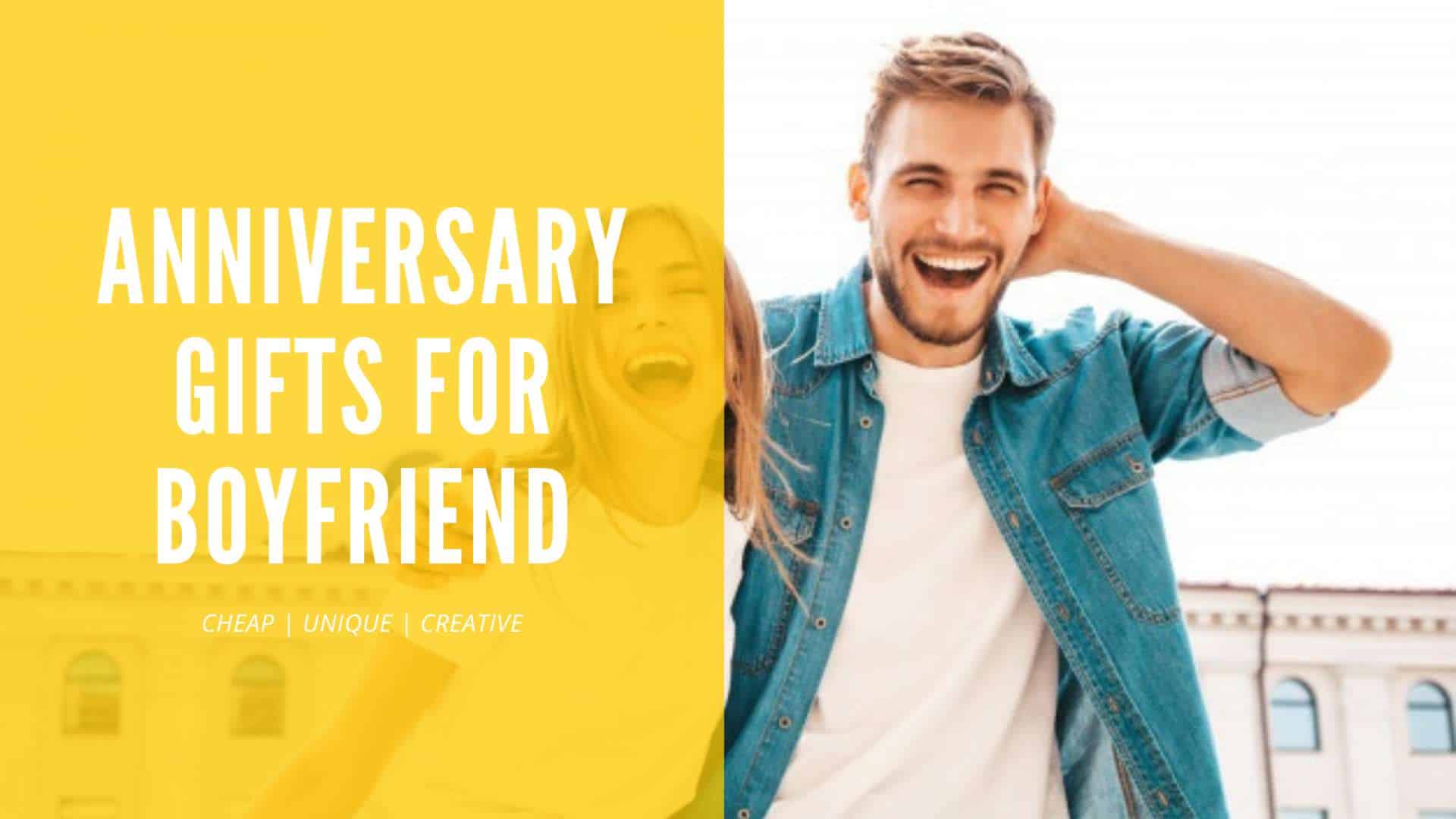 Tell your guy how much he means to you with boyfriend anniversary gifts that will make his heart melt. Whether you’ve spent six months or two years together, celebrate each moment like it’s your last. An anniversary marks the number of days you’ve enjoyed bliss and love with this very special person.

Be the best girlfriend you can be and get creative with presents and dates. The memories you share with your boyfriend will be great to look back on at your wedding. It’s a splendid thing to experience and if you feel lucky to have found him, make sure he knows it. How amazing is it to be infatuated with a man that gives you butterflies every time you think of him?

RELATED POST: Personalized Boyfriend Gifts for Any Type of Guy

If this song is in your head each time you look at him, then you know you’re lucky. This pillow is a present for the boyfriend of the century. Tell him what you’re thinking without saying a word. Show him he’s all that matters at the end of the day!

2. My Girlfriend Is Hotter Than My Coffee Funny Mug

Here’s a mug all boyfriends should be using for their coffee right this minute. Throw away all the other mugs, this is the only one he needs. If you are looking for things to get your boyfriend of 2 months, then you need not look any further.

3. You Are The Perfect Type Of Weird Custom Photo Collage Canvas Print

Being weird together is the best type of fun and a great sign you’re in it for the long haul. Make this sentimental wall decor a part of his home today, so he knows you like his quirks. What a creative anniversary gift for your boyfriend!

Many of us don’t spend enough time thinking back to how it all started. When we do, we appreciate the love we have so much more. Here’s a unique anniversary gift for the boyfriend to remind him of the sweet kiss you first shared.

How did your relationship start? Was it over a coffee date, or did it happen when you bumped into each other somewhere? Whatever it is, this boyfriend anniversary gift idea will surely give him the warm fuzzies as he reminisces that day.

Want a jigsaw-themed anniversary gift for your boyfriend? Here it is! When you’ve found the perfectly fitting puzzle piece, you know that you’ve got to hold on. Show your partner how two people from different places joined together to create something totally new.

Cuddling is so underrated in today’s world. Having someone to hold who understands us more than anyone else is precious. Here’s what to get your boyfriend, so he feels hugged even when you aren’t around. It’ll surely keep his spirits up!

8. Reasons Why I Love You

You know why you adore him, but does he? Tell him today with this handmade anniversary gift for a boyfriend. He’ll love reading all the reasons while putting together the best puzzle ever. It’s a keepsake he’ll cherish for years to come!

“I have no idea what to get my boyfriend for our anniversary.” Is that what you’ve been worrying about? No fret. He’ll be so happy to get these vouchers, he won’t know what hit him. Watch him dance with glee as he picks out what to do next.

10. You Are The Missing Piece To My Heart Custom Photo Desktop Plaque

That empty feeling you always had before you met him is gone, nowhere to be seen. Isn’t that amazing? Here’s a sincere gift for the boyfriend who completes you. Place it on his desk as a surprise, so he’s always thinking of you, day or night.

Has it been five years already? Wow, that’s something worth celebrating. If you’re looking for a cheap anniversary gift for a boyfriend, a mug is a great idea. This isn’t an ordinary mug – it’s custom-made especially for him! Morning coffee will taste extra delicious now, that’s for sure.

The universe did a little dance the night you guys met. That starry sky will be the star of this anniversary surprise for your boyfriend. The heavens knew right then and there that your love would last, even when you didn’t.

13. You Will Forever Be My Always Custom Collage Mug

Are you looking for a way to make your boyfriend’s coffee sweeter without adding any sugar in it? Here’s how you can do just that, while letting him know how much you love him. A personalized mug is an awesome dating gift for him, no matter the occasion!

What to get a boyfriend for an anniversary? How about a personalized docking station? If he’s always losing his gadgets and things, then he needs this more than ever. Finally, you won’t be hearing him ask you for the millionth time, “Honey, where are my glasses?”

Imagine the two of you under the midnight sky enjoying the sounds of nature. What’s missing? Why, this blanket, of course! If you’re planning a surprise anniversary for your boyfriend, make sure you pack this along. Nothing is more romantic than cuddling each other under this blanket.

Say hello to your boyfriend’s new pair of cufflinks, which comes with your own handwriting! He’ll love the extra boost of confidence when he’s having an important day at work. Celebrate this special day with a simple anniversary gift for your boyfriend that’s full of love!

Wondering what to get your boyfriend for an anniversary gift? Design a photo album that’s filled with five whole layers of photos from your time together. Pack in a surprise present, and he’s sure to treasure this dating anniversary for the rest of his life.

18. Message in a Glass Bottle

Here’s a cute anniversary gift idea for your boyfriend. Write him little notes to pick him up when he needs it the most. Love is definitely the best medicine, and these tiny capsules will leave him feeling great. Even when you’re not around, it’s like you’re right there with him.

So you’ve had one year of crazy love with this man. Give him something to look at while he’s studying or working so he’s always thinking of you. This personalized anniversary gift for your boyfriend will make him the happiest guy out there.

This canvas print will leave your BF singing simply because he has you in his life. Be the best GF in the world and get the perfect gift for your boyfriend on your anniversary. Now it’s time to play some music and dance the night away!

Checking out some monthsary gift ideas for a boyfriend, but worried it might seem too soon? Don’t worry about being hasty. Whether you’ve spent 3 months, 6 months, or 9 months with a person, if you know – you know. It’s about time for him to realize it, too!

What is a good anniversary gift for a boyfriend? How about a customized keychain? A girl is only going to relax once her guy is back home with her, safe and sound. Give him a reminder he’ll keep close to his heart!

Now that you’ve had six months with this awesome guy, you realize that half a year isn’t near enough. Tell him that with a canvas showcasing your best moments together. It’s a fantastic way to decorate a home and a great gift for a boyfriend anniversary!

If he loves playing chef and eating spicy food, he’ll never stop thanking you for this. When it comes to creative gift ideas for a boyfriend anniversary, this one tops the list. Get ready to spend some time in the kitchen with your man! How’s that for a date idea?

What’s a good birthday gift for your boyfriend? How about a bag that will make traveling with his cables and earphones super easy? He’ll surely appreciate this. It’s the end of him searching through his luggage whenever he wants to charge his phone or listen to music!

His parties are going to be the best in town because he’ll be mixing drinks with his awesome new bar. This unique anniversary gift is for the boyfriend who loves having his friends over. It’s time he had a fancy rack for all his favorite drinks!

Looking for personalized anniversary gifts for your boyfriend? A weekend bag with his initials on it will have him excited to plan a trip with you right away. This present is so well designed that it even has a slot for his shoes!

Here’s a thoughtful anniversary gift for your boyfriend. Get him an engraved watch so he’ll never be late to a meeting or a date. This one-of-a-kind timepiece is a keepsake and definitely something he’ll love using for years to come!

Every guy in the world wants to brew his own beer. Make his dream come true by offering him a kit that’s all prepped and ready. Watch his excitement as he is treated to the best boyfriend anniversary ever. He’s going to be a pro at brewing in no time!

Is he always complaining about not having any craft beer at home? If so, this is what to buy your boyfriend for an anniversary. Now he can leave his complaints at the door and enjoy this drink the way he likes it!

A card that fits in his wallet with a picture of you on it is exactly what your partner needs. It’s a simple gift for a boyfriend anniversary, but it means so much. Write a sweet note on it. He’s going to love reading it over and over again!

Still wondering what to get your boyfriend for an anniversary? If he has a shoebox somewhere with all his ticket stubs, then this is perfect for him. Watch him light up as he organizes everything and flips through the pages. It’ll be a trip down memory lane!

Don’t You Just Love Calling Him Your Boyfriend?

Now that you’ve seen his quirks and love being with him, hold onto him tight! These boyfriend anniversary gifts will leave your boo feeling like he’s the luckiest man on Earth. Once you’ve found the perfect present, how about some anniversary surprise ideas for the boyfriend? Take him out for a picnic, or cook him a meal from scratch. Whatever you do, he’s going to love the effort you put in because he’s simply the best!